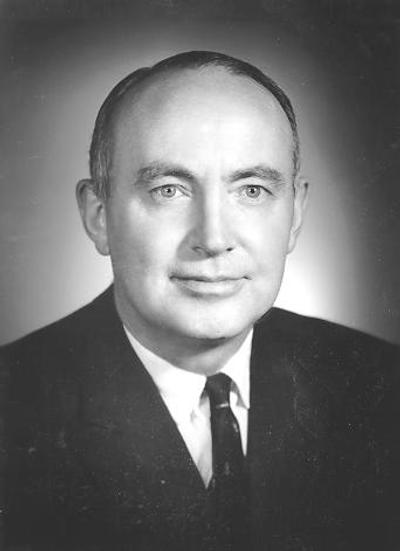 Harold Rocke Robertson, born in Victoria in 1912, returned to British Columbia after WWII and became UBC's first Professor of Surgery, serving from 1950 to 1959, and acting Dean of Medicine. In 1959 he went to Montreal to be Chief of Surgery at Montreal General Hospital and Chairman of McGill Medical Faculty's Department of Surgery. He served as Principal of McGill from 1962 to 1970.

During his career he developed an interest in lexicography and became a collector of English dictionaries, glossaries, and related works in other languages. He donated most of his library collection to UBC in 1989. The collection consists of over 350 dictionaries and encyclopedias and spans the entire history of the English dictionary.

Robertson, H. Rocke. A Collection of dictionaries and related works illustrating the development of the English dictionary. 1989

Settling the Language: Dictionaries and Language Change, 1490 to Today [PDF][1.0 MB] This exhibition catalogue from June 2015 gives detailed descriptions of a number of the items in the collection.

Dr. H. Rocke Robertson Collection: This search will bring up all the material indexed under this collection name.