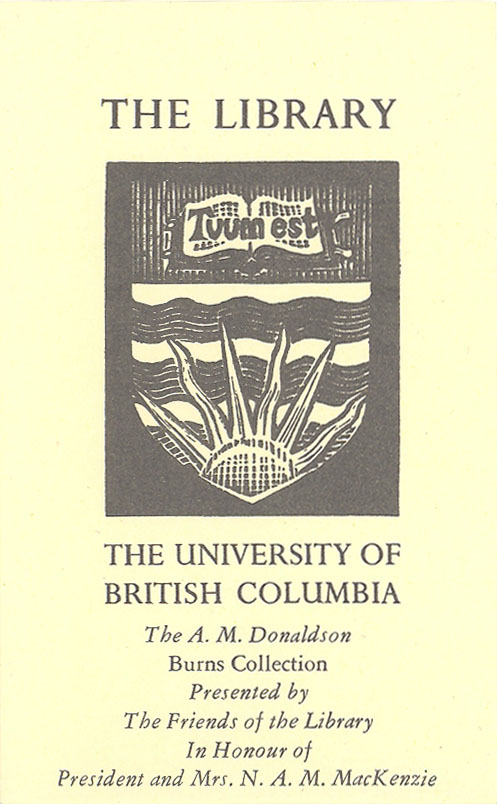 Alexander Mitchell Donaldson was born in Glasgow, Scotland, in 1891 and emigrated to Canada around 1909. He worked as a traveling auditor for the Ford Motor Company and later for Southern Motors of Vancouver.

In the 1930's Donaldson began collecting books by and about Robert Burns (1759-1796) and Scotland. The collection was acquired in 1962 by Friends of the UBC Library to honour President N.A.M. McKenzie, who retired that year.

The collection includes nearly all of the editions of Burns' works, as well as critical and biographical materials, Scottish song books, works by other Scottish writers, and works about the favourite "haunts" of Burns. The collection also includes Donaldson's archival material, including his correspondence and notes about developing his collection.

A.M. Donaldson Burns Collection: Locate all the materials with titles indexed under this name

Works by Robert Burns at Rare Books and Special Collections: Includes works published up until the end of A.M. Donaldson's collecting period in 1960.

All works by Robert Burns at UBC Library

All works by A.M. Donaldson at UBC Library