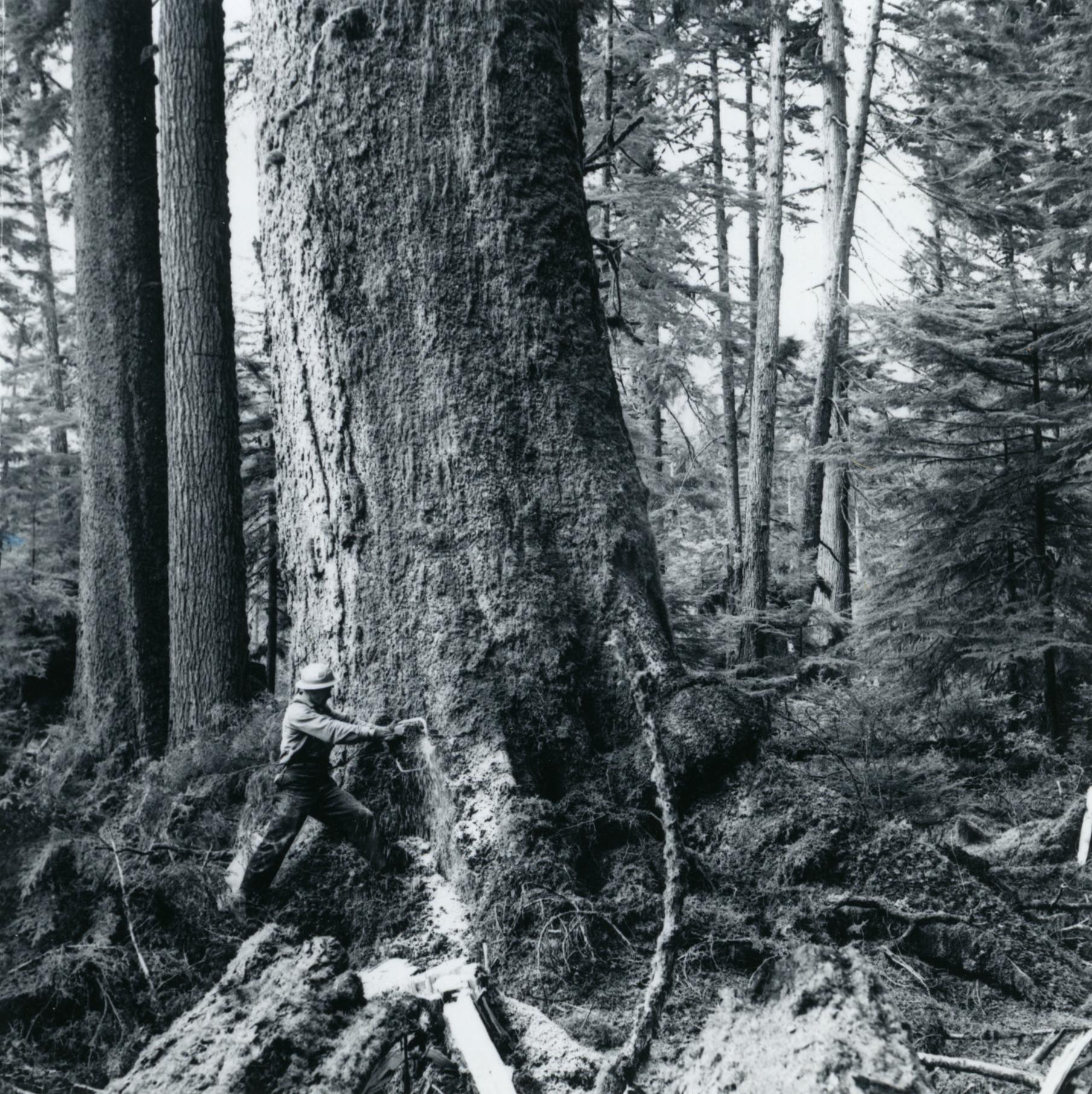 The International Woodworkers of America was established in 1937 to represent the interests of thousands of workers in the lumber industry of the Pacific Northwest.

After its formation in 1937, the IWA worked to gain legislative support for union bargaining rights. A strike held at Blubber Bay in 1938 resulted in police violence against workers, and several unionists were jailed. After a year of strike efforts, the union called off the strike. Its resources and membership were both depleted as a result. The next few years brought about World War Two and with it, an extreme increase in the need for resources and the labour to provide them. Legislation in Canada shifted towards providing rights for labour organizers, and the IWA’s membership increased as they successfully bargained for shorter work-weeks, higher pay, and better living conditions in logging camps. As the war came to a close the union was challenged based on its leadership’s communist affiliations.

The Cold-War which followed World War Two coincided with increased clashing between union members over political ideology. Union activities continued despite these internal rifts, and in 1946 the B. C. District Council 1 of the IWA won a 40 hour work week and wage increase for over 30,000 employees in the province. But by the late 1940s increased state surveillance and fear of communist activities plagued the Union leadership. The so-called anti-communist ‘white bloc’ accused ‘red’ union members of embezzling funds, and while external audits revealed no evidence for this, anti-communist members of the union utilized ‘The Voice of the IWA’ newspaper and radio-show to propagate this rhetoric. In 1948 some members from this ‘red bloc’, including former president Harold Pritchett, formed the separate Woodworkers Industrial Union of Canada (WIUC). WIUC failed to organize a majority of woodworkers and by 1951 was dissolved, with the WIUC executive recommending its members return to the IWA.

The IWA turned to a social democratic leadership and continued bargaining for wage improvements for their members. They organized in Ontario, Newfoundland, and Saskatchewan, as well as continuing to grow in the interior of British Columbia. By the 1970's the IWA in region 1, British Columbia, represented over 40,000 members, and in region 2, eastern Canada, over 10,000 workers. The IWA successfully negotiated employer funded pension plans, health and welfare plans and increased wages for all workers.

The late 1970s and early 1980s resulted in an economic recession in Canada and members of the IWA suffered job-lay offs as lumber and wood processing companies were forced to close their doors. As inflation rose, the union fought for wage increases and job security with mixed success. These issues continued into the 1990s, which saw IWA members impacted by the Canada-US Free-trade deal. The unions’ constituents were also impacted by land-use deals, and changes in technology.

Throughout all of these dynamic factors, the IWA in Canada persisted in advocating for the rights of woodworkers. They were committed to overcoming racial divides amongst workers, organizing white, Japanese, Chinese, and indigenous workers together to face the common goal of better working conditions and wages. There was also a strong female presence in the union in the form of the IWA Women’s Auxiliary chapters. In the late 1980s, the international union split in two, and the officially separate Canadian union, which formed in 1987, was simply called IWA Canada. In 1994 delegates voted to rename the Canadian chapter the Industrial, Wood, and Allied Workers of Canada (IWA Canada). In 2004 the executive of the IWA voted to merge with the United Steel Workers (USW) and became the “Wood Council” district of the USW. The union continues to function under this title today.

Browse theses and dissertations by UBC students related to the IWA in UBC Open Collections.

Search for photographs of workers and lumber history in one of the following resources held by UBC Open Collections.