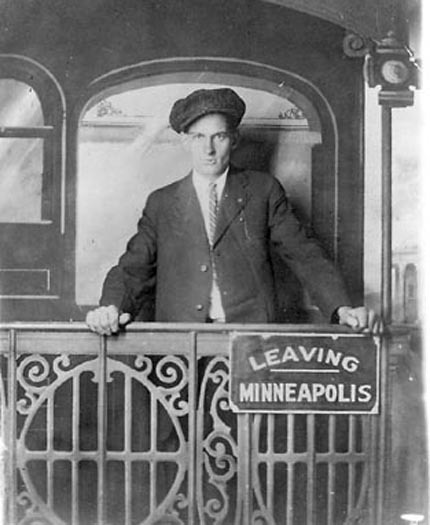 Arthur was born on 24 April 1890 in Toronto, Ontario to English and Irish immigrant parents Samuel and Mary Ann Evans (nee Bryan). Arthur left school at age 13 to support both of his parents, who were of ill health. He worked at a variety of jobs including selling newspapers, driving a team of horses, and apprenticing as a carpenter. He left Toronto in 1911, at that time a journeyman carpenter. He travelled west working on farms in Saskatchewan. He also travelled to the United States where he became involved in labour rights movements. He was arrested and jailed for three years in Kansas City for reading the Declaration of Independence at a free speech rally. In 1913, Arthur was shot in the leg by a machine gun at a coalmine strike in Ludlow, Colorado.
Ethel and Arthur met while Arthur was working in Drumheller. Ethel had four sisters and six brothers, and the family was involved in militant movements to establish a union in the coal mining community. Ethel and Arthur married on 4 August 1920 in Drumheller. They had their first child, a son named Stewart who was born on 13 April 1922 and died in 1925 during the diphtheria epidemic in Vancouver. Their daughter Jean Stewart was born on 12 February 1927.

Arthur joined the Communist Party in 1926. In 1932, he became the British Columbia organizer of the National Unemployment Association, and later leader of the Workers’ Unity League. His opinions of workers’ rights were not always popular and throughout his career, he was kidnapped, jailed, shot, and had his car demolished. Arthur Evans is most well known for leading the On-to-Ottawa Trek in 1935 during which over 1,000 unemployed men rode the rails to Ottawa to appeal to the government for better working conditions at the government organized labour relief camps. This Trek ended in Regina on 1 July 1935 when a riot broke out among Trekkers, supporters, local police, and the RCMP.

On 23 January 1944, he stepped off a streetcar and was struck by an automobile while crossing the street at Kingsway and Joyce, Vancouver. At the time of the accident, he was employed at West Coast Shipyards as the shop steward in the Amalgamated Shipwright’s Union. He died on 13 February 1944 at the age of 54.