The fonds and collections included here contain the records of women whose materials capture a variety of experiences during wartime as writers, teachers, artists, and internment survivors as well as women who served in the military during times of peace and conflict.

For the fonds of women and organizations involved in peace activism, search under "Women, Politics, and Activism."

For nurses who served during wartime, search under "Women and Health." 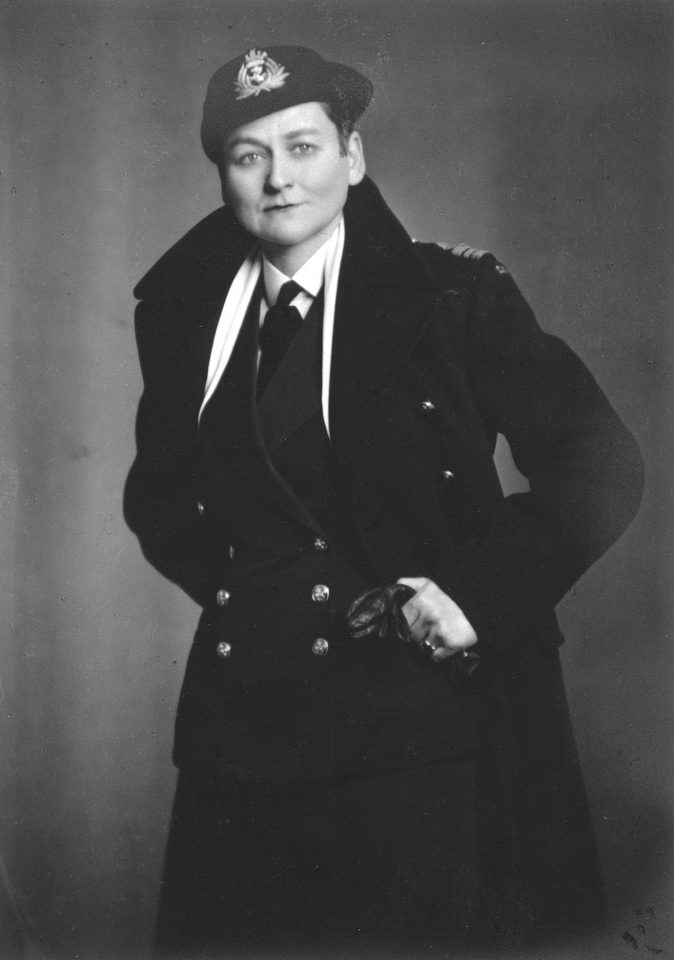 Unit Officer A. Alexis Alvey of the W.R.C.N.S., scanned from material in her fonds at RBSC.

A. Alexis Alvey was born in Seattle, Washington and later attended McMaster University in Ontario (1932-33). Following university, she helped organize the businesswomen’s company of the Toronto Red Cross Transport Corps and commanded it for two years. She also served as a lecturer to the entire Transport Corps for Military Law, Map Reading, and Military and Naval insignia. In 1942, the Womens Royal Canadian Naval Service (W.R.C.N.S., Wrens) selected Alvey for its first class for training in Ottawa. Having passed a selection board to become one of the first commissioned officers, she was appointed acting Chief Petty Officer Master-at-Arms. Following her career with the W.R.C.N.S., Alvey returned to Seattle to work for the University of Washington Libraries as an acquisitions technician. Throughout her life, Alvey took special care to collect and preserve memorabilia related to the activities of the W.R.C.N.S and regularly accepted donations from former W.R.C.N.S. to aid her documentary activities. The fonds consists of scrapbooks, correspondence, logs, photographs, and subject files relating to her career and the activities of the Women's Royal Canadian Naval Service, as well as the scrapbooks of former W.R.C.N.S. Grace Brodie and Dorothy Isherwood.

The Haweis Family fonds contains materials related to various members of the Haweis family. Of particular relevance to women’s history is Mary Elizabeth Joy Haweis, who was an author of women's and children's books and whose book on Chaucer became a standard text for English schools. Her daughter Hugolin was a photographer, humourist, and writer and her granddaughter Renee Haweis Chipman was a writer, served in the Canadian Army Women's Corps, established the Lillooet Museum, and acted as its curator until her death in 1986. The fonds consists of photographs of the Haweis family, covering topics like family, friends, travel, and Renee’s military service.

John Langley married Edith Kidner in England in 1879, where he was working as a grocer and she as a butcher. In 1888, they moved to Port Arthur, Ontario where they lived for a few years with their two daughters, Celia and Winnie. In 1891, the family moved to B.C., where Langley worked as a farmer in the Abbotsford area until his death in 1919. The fonds consists of personal and family records including letters (1891-1907), postcards (1905-1951), photographs, household accounts (1920-1924), diaries (1915-1916), and documents relating to various activities of the Langley family. Edith’s diaries, in particular, present a detailed picture of Vancouver life during WWI, specifically as it related to her own life and role of a schoolteacher at that time.

Leonard G. McCann was born in 1927 in Shanghai and attended St. Giles British School throughout his youth. During WWII, he and his mother Barbara were interned in a Japanese prisoner-of-war camp at Santo Tomas University in the Philippines. While interned, the McCanns participated in the functioning of the camp’s internal administration—Barbara as a Room Monitor and Leonard working in the gardens and hospital. Internees were liberated and evacuated from the camp in February 1945. The McCanns were taken by ship to San Francisco, California, but quickly relocated to Canada to avoid the U.S. Military draft. After the war, the McCanns came to Victoria, B.C. based on a sponsorship from Leonard’s aunt and uncle.

The collection consists of pertaining to the Santo Tomas Interment Camp in the Philippines during WWII. The camp was active from 1942 to 1945 and housed over 4,000 prisoners-of-war. Records reflect the internal administrative structure and functioning of the camp, daily life of internees, political activities surrounding the camp, and the personal experiences of Barbara and Leonard McCann.

Renee Goldsmith Kasinsky was born in the United States and became a landed immigrant in Canada in 1969. She has taught sociology in both Canada and the United States and has worked as a consultant for Operon Research Associates in Vancouver. The fonds consists of records relating to issues such as amnesty, selective service, and Canadian aid groups for draft resistors. Included is correspondence from the Vancouver Committee to Aid American War Objectors (1968-1975), questionnaires, interview transcripts, clippings, notes, and printed material. The material was created during the writing of Kasinsky's book entitled Refugees from Militarism: Draft-Age Americans in Canada.

Shizuye Takashima was born in B.C. in 1930. At age eleven, she was sent with her family to the Japanese internment camp of New Denver in British Columbia’s interior. Following the war, Shizuye studied art at the Ontario College of Fine Arts, where she continued on as an instructor after graduating. Her experience in internment camps was the subject of her award-winning autobiographical novel, A Child in Prison Camp. The fonds consists of an annotated draft manuscript of the novel.