The fonds and collections included here contain the records of women and organizations that were dedicated to supporting and maintaining women’s health. Many of the women were nurses who served during various wars. 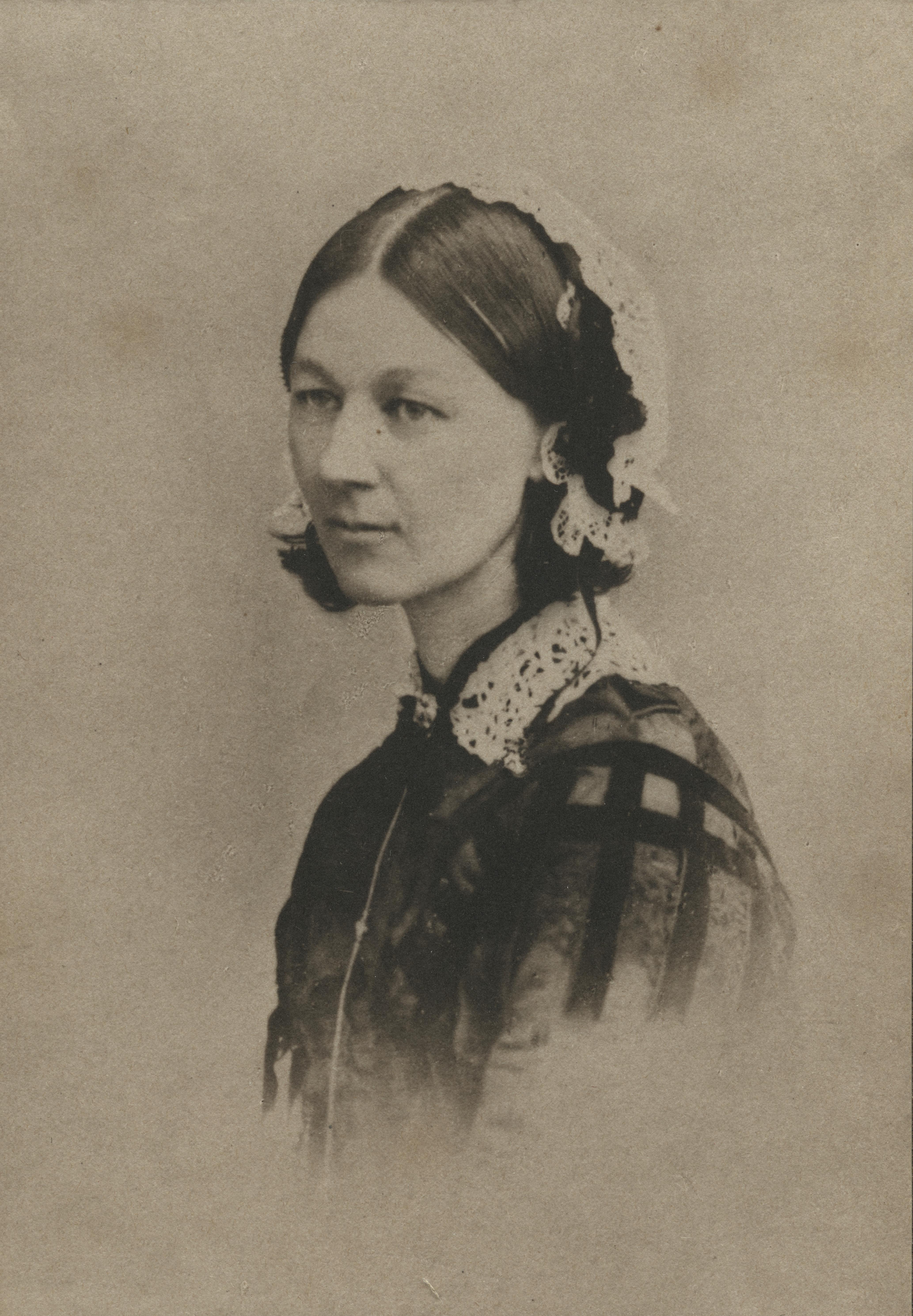 Famed nurse Florence Nightingale, whose letters are housed at RBSC, in 1859.

Florence Nightingale was born in May of 1820 in Florence, Italy to an affluent British family of merchants. When she was five, her father inherited estates in England, moving the family there. It was in a neighbouring village that Florence first aided the ill and poor and, by the age of sixteen, she believed nursing to be her divine purpose. Although her parents forbade her from pursuing a nursing career, Florence enrolled as a nursing student in Kaiserswerth, Germany in 1844. In 1853, the Crimean War began with the British Empire combating the Russian Empire. A year later, due to major casualties as a result of unsanitary and inhumane conditions, the British Secretary of War Sidney Herbert requested Nightingale to organize a corps of nurses to be sent to Crimea. In response, Nightingale assembled over 30 nurses and sailed with them to Crimea. After the way, she wrote an 830-page report analyzing her experience in Crimea called Notes on Matters Affecting the Health, Efficiency and Hospital Administration of the British Army. In August 1910, Nightingale at her home in London.

The collection contains correspondence, the majority of which are letters are addressed to Nightingale while others are sent from her or involve other correspondents discussing Nightingale. Letters date from 1877 to 1965. There are also newspaper clippings, transcripts, notes, and photographs.

Digitized versions of her letters are available here at UBC Open Collections.

Hanne Wassermann Walker was born in Vienna, Austria in 1893. As a young woman, she attended trade school, wherein she studied portrait photography, freehand drawing, chemistry, commercial/business math and writing, and more. After trade school, Hanne attended the Röntgen Institute, Vienna's first x-ray institute, where she learned about human anatomy and physical wellness. She went on to pioneer a series of stretches and exercises for women she called “The Hanne Wassermann Method,” which she described as a form of gymnastics. She focused not only on physical improvement, but also the psychology of fitness, achieving enough success to open a school in Vienna, teach at an upscale resort in Italy, work as a personal trainer, and advance her philosophy and fitness techniques through lectures, books, pamphlets, and newspaper/magazine articles. Following Nazi Germany’s 1938 annexation of Austria, Hanne and her family began making preparations to emigrate from Europe. She initially traveled, worked, and lived in other parts of Europe (Britain and Italy in particular), before moving to New York in December 1939, followed shortly afterwards by her mother and her partner, George. Her work took her to California until she eventually settled in Vancouver, B.C.

The Walker fonds consists of documents, archival records, photographs, ephemera, and artifacts pertaining to her life and work as described. These materials relate to several broad themes: health and fitness, travel, friends and family, immigration to North America, and art/photography. Hanne's collection provides a window into the early 20th century physical culture movement; the experience of Jewish Europeans in the lead-up to, during, and after World War II; and the landscapes of British Columbia between the 1940s and 1970s.

Katherine Watson Emery was born in New Brunswick in 1900, but eventually moved to Vancouver, B.C. where she trained as a nurse. In 1944, she was accepted into overseas service with the St. John Ambulance Brigade of Canada to tend to the wounded during WWII. Her fonds consists of photographs, correspondence, newspaper clippings, ID cards, and ephemera that document her service as a career nurse as well as her time serving during the war.

Martha May Beardmore (née Wilson), was an English nurse who aided the British during WWI. She was a public health nurse in Canada when Britain declared war on Germany in 1914, at which point she joined the Queen Alexandra’s Imperial Military Nursing Service. As part of the Military Nursing Service, she aided efforts in France and the Balkan countries. She also ended up in the Palace of the Tsar of Russia and became a nurse to Grigori Rasputin, before eventually being sent back to England after suffering from shell shock. After recovering, she was called to Buckingham Palace by King George V who presented her with the Royal Red Cross for her nursing services during the war. By the time of her death in 1963, she had moved back to Canada and lived in Vancouver, B.C. with her husband. The majority of the collection consists of over 200 handwritten copies of Beardmore’s accounts of her work during WWI in Serbia and Salonika. There are also notes on a presentation she attended as well as newspaper clippings.

Mary Bishop was born in 1913 and eventually became recognized as one of B.C.’s  major advocates for planned parenthood. She competed a M.A. thesis entitled, “From 'Left' to 'Right': A perspective on the role of family planning in the West and in South Asia” (UBC, 1971). The fonds consists of materials created and assembled between ca. 1960-1988, such as subject files, reports, and printed material concerning social and political issues in B.C. related to families, the law and fertility, violence against women, and children in society.

The Positive Women's Network (PWN) was formed in 1991 in Vancouver, B.C. as a support group run by and for women living with HIV/AIDS and/or Hepatitis C. PWN offered free programs and resources to women living with HIV and Hepatitis C as well as women who were vulnerable to those diseases, health care workers, and service providers throughout the province. These programs supported communities by providing a full spectrum of non-judgmental care to women and their families. The PWN provided support and education in the form of advocacy, retreats, a drop-in centre, food bank, hospital visits, a hot lunch program, information and referrals, one-on-one support sessions, support groups, and telephone counselling. The organization eventually closed in April 2017 due to lack of funding and the changing landscape of HIV/AIDS services in B.C. The fonds consists of records related to PWN’s various programs and projects, support and educational resources, and operations and administrative activities.

The Pro-Choice Action Network was a pro-choice advocacy society that was active in B.C. from 1987-2009. Throughout its run, Pro-CAN was responsible for the creation and operation of the Everywoman’s Health Clinic, a freestanding clinic that offered abortion services in Vancouver and continues to function today. Before it shut its doors in 2009, Pro-CAN was a productive and successful coalition headed by women who were passionate about ensuring that all women would have access to safe, fully-funded, high-quality abortion services in a society where such choice is funded and ensured by the government.

Materials in the fonds include some of the following: minutes and agendas; legal documents; correspondence; event ephemera; the organization’s quarterly newsletter entitled The Pro-Choice Press; safety and security files; files on organizations with similar goals; and resource and subject files that span a broad number of topics Pro-CAN found to be useful to its operation.

Sister Mary Gonzaga was born Georgiana Ffarington Barrie in 1825. She entered the Convent of Our Lady of Mercy in Bermondsey, England in 1848 and professed her vows in 1851. During her life, she was a close friend of Florence Nightingale's, having accompanied her to Crimea to nurse sick and wounded British soldiers during the Crimean War. Her collection consists mainly of correspondence to and from Gonzaga during the Crimean War.