The fonds and collections included here contain the records of women whose materials reflect their lived experiences involving domestic labour such as homemaking and raising families. 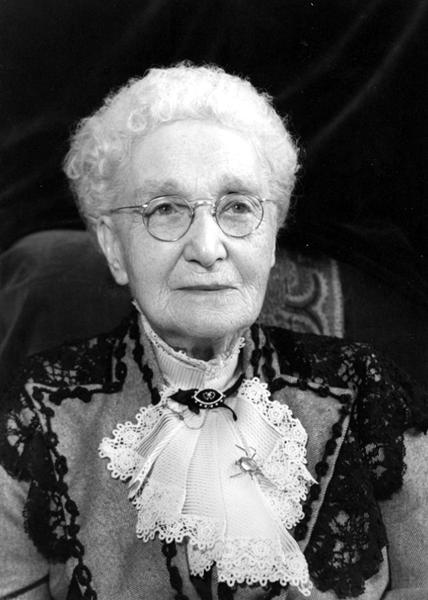 Alice Ravenhill, an educational pioneer in home economics whose fonds is housed at RBSC, photographed in 1948.

Alice Maud Jones was born in Great Britain in 1882 and married James McKay Burge in 1903. After employment in South Africa, England, Rossland, and Vancouver, James purchased the Cariboo Ranch at Gray Creek on Kootenay Lake and moved there in the early 1920s. After his death in 1934, Alice Maud continued to live on the family farm and raise their five children on their beloved Kootenay Lake property. The fonds consists of her diary entries from January 1, 1931 - November 14, 1948, totaling 1,424 pages. They contain the record of a women whose resourcefulness, affection, and good humour sustained her family through difficult times. Her daily records, thoughts, and observations offer a window on family and community life in the West Kootenays.

Born in England in 1859, Alice Ravenhill was trained in home economics, childcare, and sanitation. Arriving in B.C. in 1910, she became active in organizations devoted to issues of women, education, and First Nations and Indigenous peoples. She devoted her time to researching aboriginal culture, publishing books, and helping found the Society for the Furtherance of B.C. Indian Arts and Crafts. The fonds contains materials related to Ravenhill’s personal life, writing, and the various organizations she was involved in that pertain to Indigenous peoples.

Bea Millar was born in 1919 and worked for B.C. Hydro in the 1960s and 1970s as a Home Service Consultant, wherein she was responsible for coordinating the company's customer information television and radio broadcast appearances. She was also a onetime chairman of the British Columbia Home Economists in Business Association as well as a guest speaker at numerous conferences across the country on home economics. The fonds consists of subject files, office files, printed material, videos, photographs, and slides relating to home economic topics such as cooking and kitchen and laundry planning that were presented by Millar on behalf of the British Columbia Hydro Home Service Centre.

The British Columbia Home Economics Association was created in 1975 with a principle goal of promoting the well-being of individuals and families in B.C. through the advancement, determination, and encouragement of the skills and knowledge of family life and care by trained home economists. The Association participates in various projects such as training other in leadership, providing scholarships, staging conferences, and selling cookbooks. The fonds consists of minutes, correspondence, and printed material relating to the activities of the organization and its predecessor, the Vancouver and District Home Economics Association (1958-1972).

John Langley married Edith Kidner in England in 1879, where he was working as a grocer and she as a butcher. In 1888, they moved to Port Arthur, Ontario where they lived for a few years with their two daughters, Celia and Winnie. In 1891, the family moved to B.C., where Langley worked as a farmer in the Abbotsford area until his death in 1919. The fonds consists of personal and family records including letters (1891-1907), postcards (1905-1951), photographs, household accounts (1920-1924), diaries (1915-1916), and documents relating to various activities of the Langley family. Edith’s diaries, in particular, present a detailed picture of Vancouver life during WWI, specifically as it related to her own life and role of a schoolteacher at that time.

Nan Bourgon was a pioneer settler in the Bulkley Valley in B.C. Her fonds consists of manuscript copies of “Education in the Bulkley Valley” and “University Extension School of the ‘30's,” both written in the 1930s. The fonds also includes a transcript of her memoirs about life in the Bulkley Valley from 1914-1962. Relating mainly to pioneers in the Aldermere, Telkwa, Round Lake, and Hubert areas of B.C., the manuscript served as a regional gazetteer of local history and has been published as Rubber Boots for Dancing.