The fonds and collections included here contain the records of women whose lives were dedicated to spiritual aims, such as missionary work and mysticism. 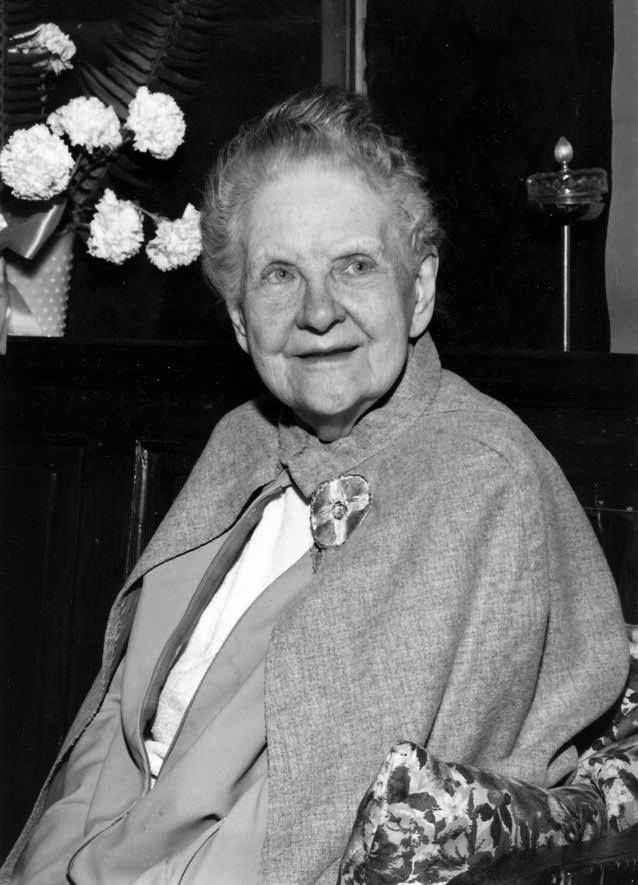 Mary Olga Park, a renowned B.C. mystic and spiritual teacher, whose fonds is housed at RBSC.

Image source: donated by Susan McCaslin, donor of the Mary Olga Park fonds at RBSC and author of Into the Mystic: My Years with Olga (2014).

Born in Winnipeg, Manitoba in 1910, Jessie Miller worked briefly as an Anglican missionary in Saskatchewan before being posted to a church in Gifu, Japan. She worked largely with women and children, particularly those living with blindness, and spent the majority of her life in Japan until poor health forced her to return to Canada in 1969. The fonds consists of Miller's slides of missionaries, hospitals, and houses in Japan, including street scenes of Tokyo.

Mary Olga Park (née Bracewell) was a contemporary spiritualist mystic and self-published writer who lived most of her life in Vancouver, British Columbia. Born in Yorkshire, England in February 1891, her family immigrated to B.C. in 1910, when she was nineteen years old. By 1914, Park began to receive dream visions showing her the experiences of soldiers in WWI. From then on, she received psycho-spiritual experiences of Jesus Christ and other saints, philosophers, and thinkers. Although she was known for her non-denominational, theological beliefs and for the prophetic visions she experienced, she did not consider herself the head of a church or esoteric cult—or as a medium or psychic—but rather as a spiritual teacher. She referred to the informal society she created with her students as the Society of the Mystical Communion of Christ. The fonds consists of records generated and assembled by Park related to her personal life and associations, her career as a self-published writer, artist, and spiritual teacher, and the various psychic experiences that she encountered throughout her life.

Rudolph and Edith Crook were Canadians who served as Baptist medical missionaries in the Szechuan province of China between 1920 and 1950. The fonds consists of a manuscript, black-and-white and colour prints, and slide images relating to life in the Szechuan province of China (1920-1950). The manuscript is entitled A Trip to Tibet (Summer 1930) and the photographs chronicle a trip taken by the Crooks with fellow medics and missionaries. The considerable slide and print collections reveals aspects of the people, life, and topography of China during the time the Crooks lived and worked there.

Emma Crosby (nee Douse) was the daughter of a missionary who emigrated to Canada from England in the 1830s. In 1874, she married Thomas Crosby, another missionary, and moved with him to Port Simpson (now known as Lax-Kw'alaams), where for the next quarter of a century, they lived among the Tsimshian people. The fonds consists primarily of Emma's letters to her mother and others throughout the course of her married life and missionary work. The letters shed light on the complicated relationships between missionaries and Indigenous peoples in B.C. in the 1800s as well as provide details of the extent to which missionaries' wives were involved in missionary work.

Many of the letters in this fonds are digitized and available to be viewed here in Open Collections.

The American National Women's Christian Temperance Union was formed in Cleveland, Ohio in 1874 and its Canadian branch was established in Ontario in 1875. The organization enjoyed some success in North America with the passage of Prohibition laws in 1918. As of 1985, there were fewer than 4,000 members in Canada. The fonds consists of convention reports (1963-1969), some correspondence, a script for a CBC broadcast (1953), two essays, an article and scrapbooks of clippings (1938-1960).

The fonds consists of minutes and membership rolls of the Methodist Church of Canada’s Woman's Missionary Society Japanese Auxiliary from 1911 to 1925.