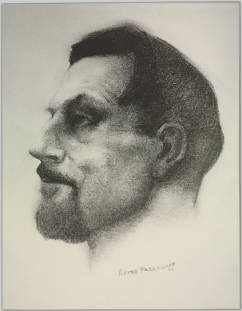 Malcolm Lowry (1909-1957), was an English novelist, short story writer, and poet. He is best known for his novel Under the Volcano, which was first published in 1947.

Lowry was educated at The Leys School, near Cambridge England, where he wrote many short stories and articles for the school`s newspaper. However, Lowry rebelled against his conventional bourgeois upbringing, and as a result, he worked as a deck hand for the SS Pyrrhus. In the early 1930s, Lowry returned to England and enrolled at the University of Cambridge. There, at age 24, Lowry wrote his first novel, Ultramarine, based on his experience on his sea voyage. The novel was published in 1933, and reissued in 1963.

After graduating from Cambridge in 1932 with a BA, Lowry moved to Paris where he met and married his first wife, Jan Gabrial. In 1935, Lowry moved to Hollywood, California. Later, he reunited with his wife in 1936, when both settled in Cuernavaca, Mexico. It was there that Lowry began writing Under the Volcano, which would take him more than ten years to complete.

In 1937, Lowry`s wife left him and he returned to Hollywood. There he met his second wife, actress and aspiring writer, Margerie Bonner. The two moved to Dollarton, just outside of Vancouver, BC, in 1940 after Lowry's visa expired. Lowry continued to work on Under the Volcano, which was published in 1947. In 1954, the Lowrys left Canada for Europe, first living in Italy and then in England. Lowry died in Sussex in 1957. Despite his early death, many of his works have been published posthumously, including a collection of short stories titled Hear Us O Lord from Heaven Thy Dwelling Place, Selected Poems of Malcolm Lowry, October Ferry to Gabriola, and the unfinished novel, Dark as the Grave Wherein My Friend is Laid.