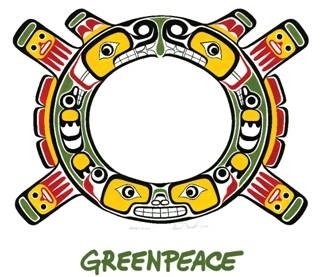 You’ve probably heard of Greenpeace. Between their foundations in the early 1970’s to the present day, they’ve become a household name, redolent of direct action taken on behalf of the environment and environmental issues. But how did this organization operate? How did it run its finances, organize its various environmental campaigns, navigate and support a wide network of offices and members around the world? These are the kinds of questions that can be answered by consulting the Greenpeace International, Stitching Greenpeace Council fonds, and the kinds of questions that might inform future organizing and education around climate.

It can be difficult to remember, given the dire nature of the current climate crisis, how long people have been organizing and fighting for radical change. Yet people have been doing this for a very long time, and a lot can be learned by studying their successes and failures. One such person was Douglas Mulhall, who donated the Greenpeace International, Stitching Greenpeace Council fonds to RBSC. Mulhall rose in the Greenpeace organization from Supervisor of door-to-door canvasing activities, to eventually become North American Manager of the East-West Environmental Education Project, Manager of the Pollution Prevention Plan for Earth Day, and Co-founder of Greenpeace Moscow. At RBSC we have about five and a half metres (!) of textual records documenting Mulhall’s activities in the organization, including campaign records, fundraising records, meeting minutes, newspaper clippings and correspondence. For further information on the fonds, check out the finding aid. If you’d like to see these materials in person, please come visit us at RBSC! 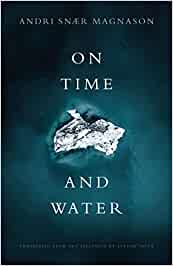 On Time and Water

"The world is full of stories; far too many of them disappear into fog." On Time and Water (Andri Snær Magnason; translated by Lytton Smith) is a leisurely, introspective ramble through about a couple of centuries' worth of time, measured against human and glacial lifetimes. The author sits down to tea with his ninety-four-year-old grandmother and ten-year-old daughter, and reflects that when his daughter is his grandmother's age it will be 2102; if her own grandchild, in turn, reaches ninety four, it will be the year 2186. "Imagine that. Two hundred and sixty-two years. That's the length of time you connect across. You'll know the people who span this time. Your time is the time of the people you know and love, the time that molds you......You can touch two hundred and sixty-two years with your bare hands. Your grandma taught you, you will teach your great-granddaughter. You can have a direct impact on the future, right up to the year 2186" Magnason posits that the disproportionate apathy of policymakers and the general populace towards climate change (compared to the alarming science that accumulates) is due to the hugeness of the issue and the enormity of time involved; the human mind finds the small and personal narratives much easier to grasp. Accordingly, Magnason frames climate change through his own family's stories, often connected with the glaciers of Iceland: his grandparents' memories as newlywed members of the Icelandic Glaciological Society; the baby's dress, made from cloth salvaged from an American airplane that had crashed onto Vatnajokull, the glacier; his uncle John the herpetologist, who quietly reversed the extinction of several endangered species of crocodiles; his own fascination with time and history, occasionally straying into mythology (can the ancient cow Audhumla at the beginning of the world in Norse mythology be linked to the Himalayan glaciers?). Firmly positioned as a personal exploration and not a "science book," the stories are quietly augmented with images and statistics (there are personal photographs and some numbers mentioned, but no tables or graphs) showing the rapid change of the world in the past few decades. These serve to emphasize the question: "When the glaciers are gone, what is Iceland? Land?" 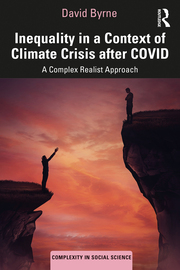 Inequality in a Context of Climate Crisis after COVID: A Complex Realist Approach

Inequality in a Context of Climate Crisis after COVID: A Complex Realist Approach examines the crisis of three interconnected global problems: economic inequality, climate change, and the COVID-19 pandemic. Bryne takes into account multiple, overlapping issues that beset the planet: high and middle-income countries are responsible for much of and interconnected with climate change; in low-income countries, political discontent and social instability accompany economic inequalities with a corresponding rise of COVID-19. The book uses a complex realist frame to examine factors underlying complex social-economic-political-ecological systems, and will be of interest to students in the sciences (and social sciences) who hope to make sense of global inequalities of power, and its links to neo-liberal capitalism in the 21st century. 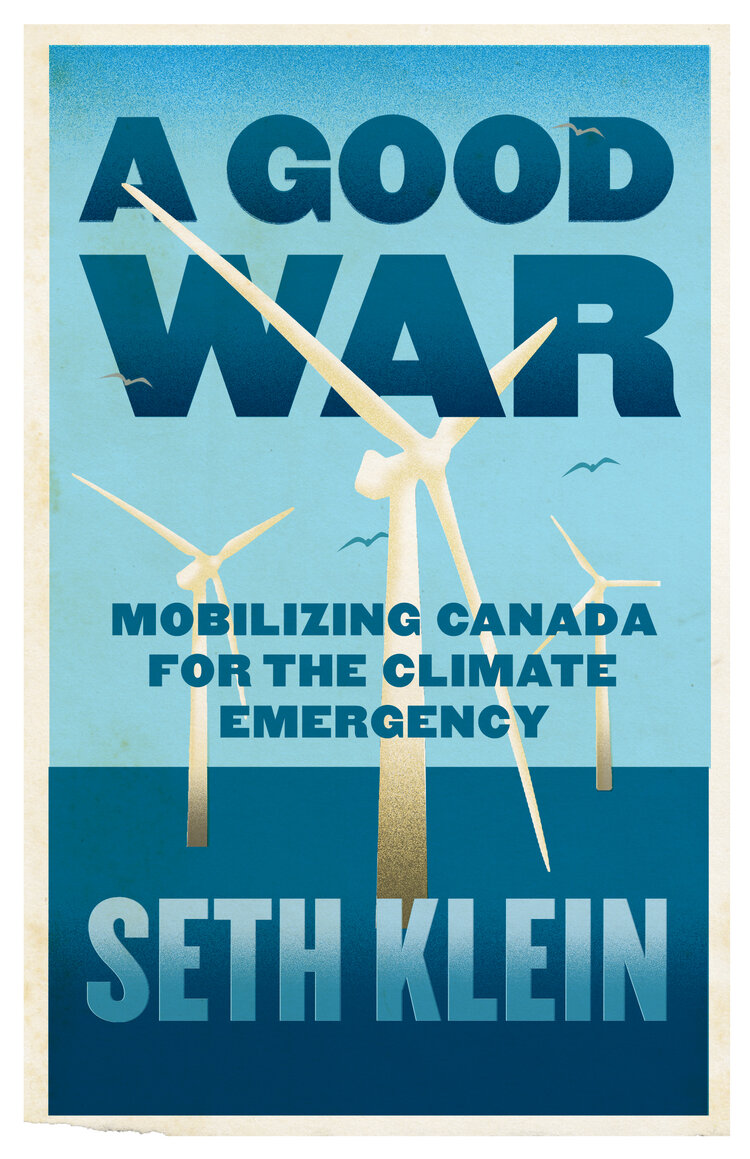 A Good War: Mobilizing Canada for the Climate Emergency

A Good War: Mobilizing Canada for the Climate Emergency takes a detailed look at Canada's WWII efforts and shows how similar strategies could be employed now to address climate change. The main takeaway of A Good War is that meeting our emissions reductions responsibilities is entirely possible and within our reach and provides an opportunity to make our communities more equitable, healthy, and resilient at the same time. Klein offers practical solutions for the many challenges we face along with the reassurance that we've done this before. It's an inspiring book that makes you want to get to work. Klein also recently launched the Climate Emergency Unit inspired by lessons from A Good War on how to mobilize action for a just transition, and you can also find related art and music on the book's companion website. 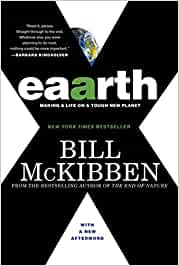 Eaarth: Making a Life on a Tough New Planet

"Eaarth represents the deepest of human failures. But we must still live on the world we've created - lightly, carefully, gracefully." Eaarth. Not a typo but a new name given by author Bill McKibben to the planet we've profoundly altered through the burning of fossil fuels. In this well-researched book from 2010, McKibben cites numerous examples of places around the world severely impacted by increased temperatures, drought, floods, hurricanes, forest fires, insect pests, sea level rise, melting glaciers and sea ice, and ocean acidification. This new planet is more expensive than the old one with governments spending billions of dollars on infrastructure to mitigate impacts of climate change. If a system is said to be "too big to fail" then it's too big. Built on the principle of infinite economic growth and expansion, McGibben describes the failures of the large banking systems, big agriculture, and the fossil fuel sector. McGibben advises that it's time to develop new habits to live on Planet Eaarth. Instead of growth, can we focus on maintenance instead, and create smaller, local solutions? McKibben answers this question with successful initiatives from his home state to countries around the world. Small-scale agriculture can be more productive than industrial farming by using strategies such as inter-cropping, seed biodiversity, natural fertilizers, and the elimination of pesticides. Energy conservation efforts and sources such as solar panels and wind turbines can reduce the reliance on fossil fuels, and generating power closer to home will reduce costs associated with lengthy transmission lines. The book ends with an inspiring account of how McKibben and six university students coordinate a massive Earth Day event, advocating for an 80% reduction in carbon emissions. This ultimately led to the creation of 350.org, an international organization to eliminate fossil fuels and transition to 100% renewable energy. McKibben's latest book is Falter: Has the human game begun to play itself out? (2019) You can follow him on Twitter @billmckibben 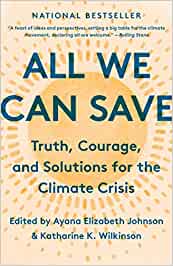 All We Can Save: Truth, Courage and Solutions for the Climate Crisis

All We Can Save is an anthology of 60 brief essays and poems by women exploring hope and adaptation in the face of climate change. Topics include activism, agriculture, energy, environmental racism, health, law, policy, psychology, urban planning, and much more, all with the common theme of “ferocious love” as the editors put it in the final chapter. My personal favourite pieces are the essay “Mothering in an Age of Extinction” by Amy Westervelt, and the poem “Did it Ever Occur to You That Maybe You’re Falling in Love?” by Ailish Hopper. The companion website links to further resources, including teaching tools and discussion group facilitation guides. There’s even a Spotify playlist (key connecting authors to songs here) 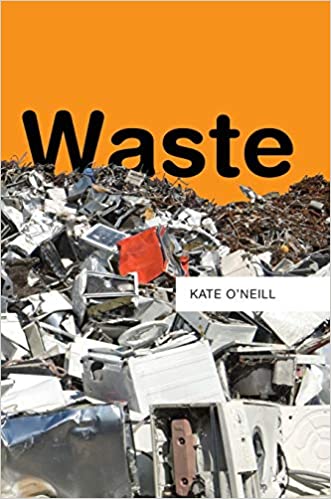 Waste is one of the planet's last great resource frontiers. From furniture made from up-cycled wood to gold extracted from computer circuit boards, artisans and multinational corporations alike are finding ways to profit from waste while diverting materials from overcrowded landfills. Yet beyond these benefits, this 'new' resource still poses serious risks to human health and the environment.